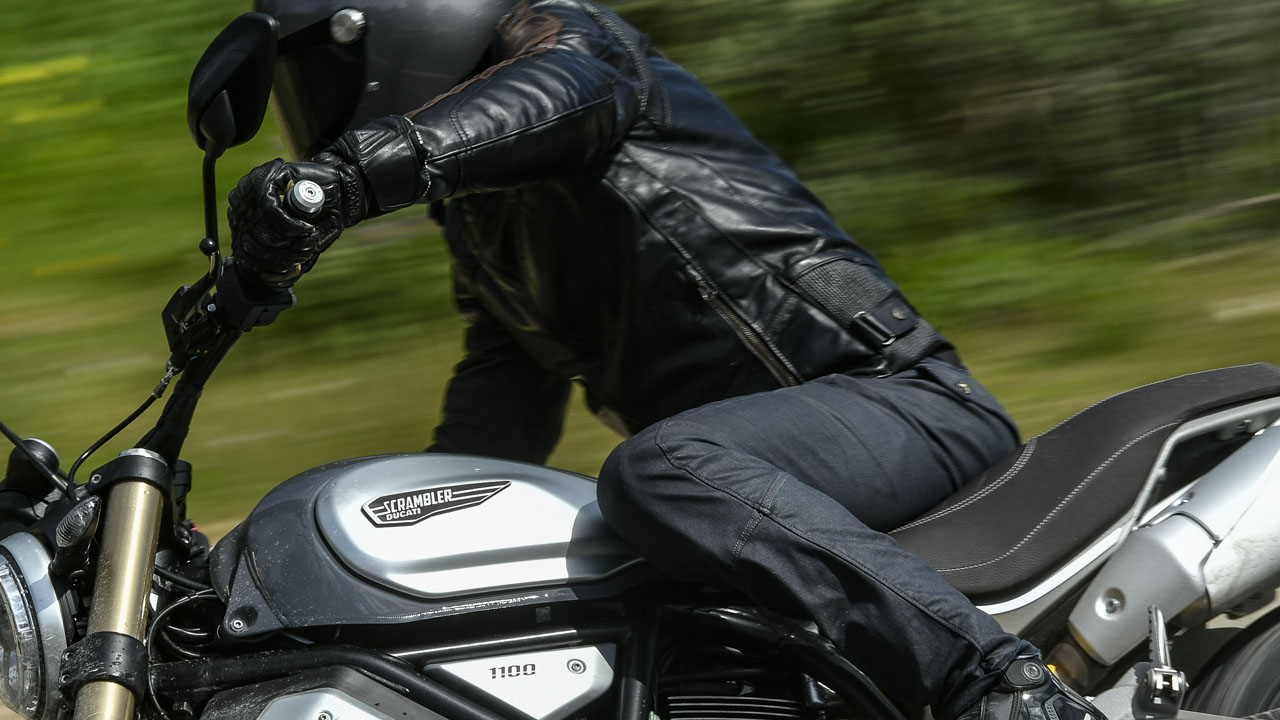 The Ducati Scrambler has received a good deal of criticism since its birth three years ago. Some people not liking its lack of high speed prowess, some not liking that it isn’t drenched in the latest electrickery, but mostly it is accused of being nothing more than a fashion accessory made for people who like tight jeans and chequered button-up shirts. This criticism is mostly by people in leathers with unused knee sliders who are upset by how much happier the Scrambler brigade looks. 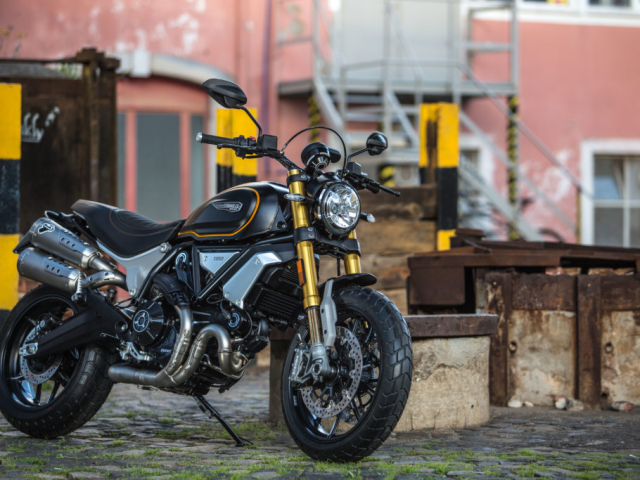 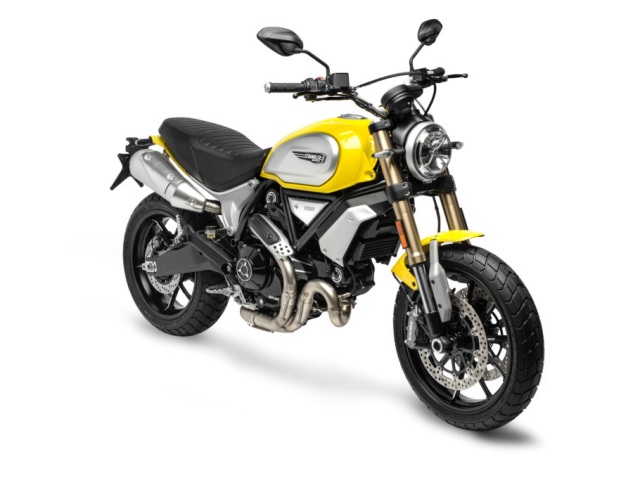 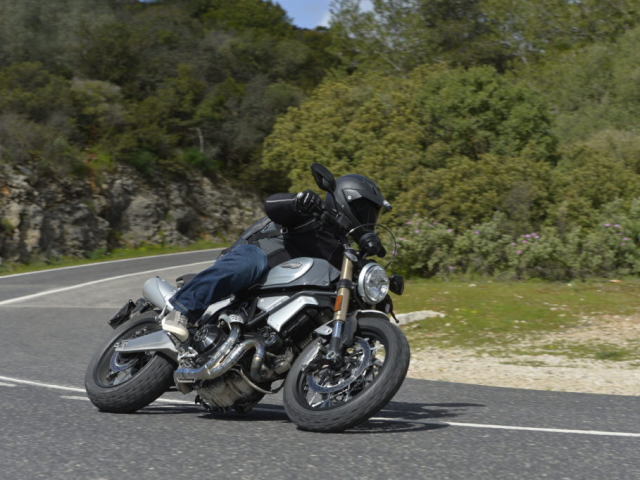 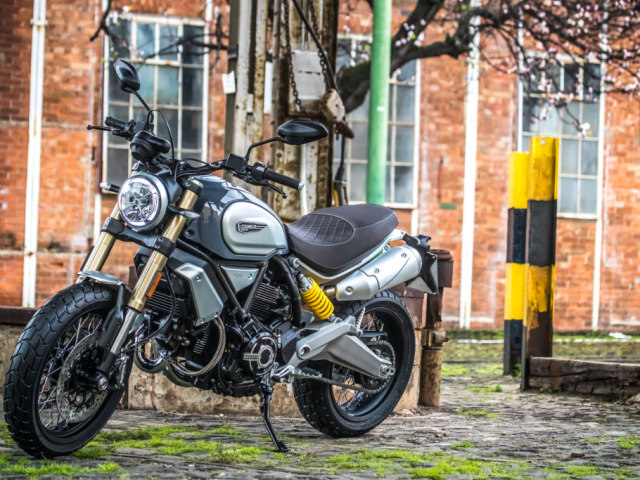 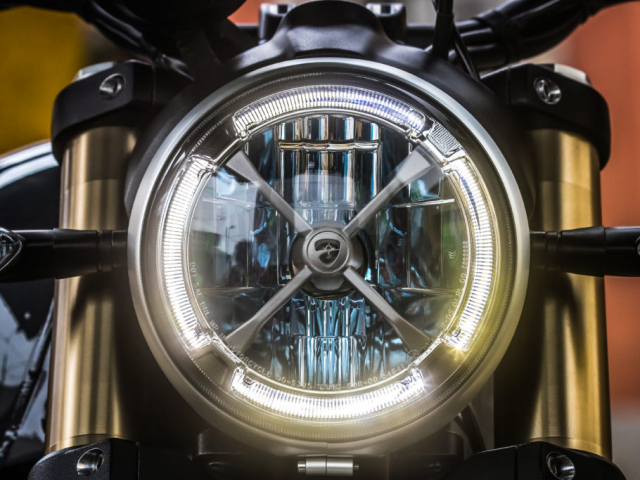 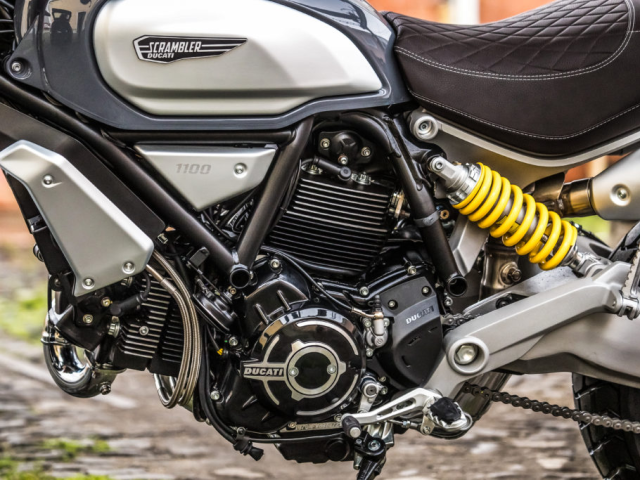 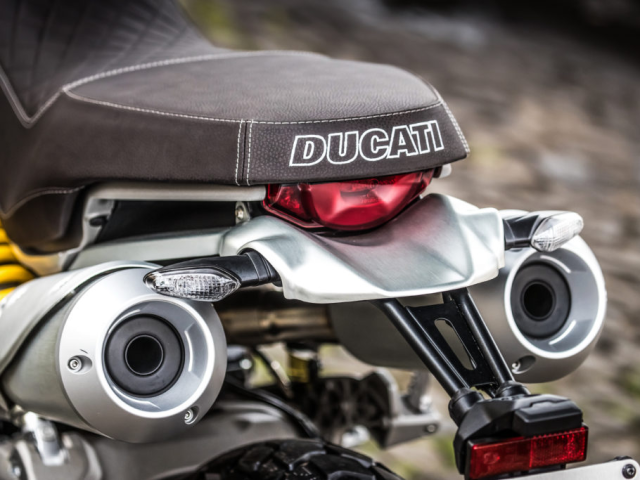 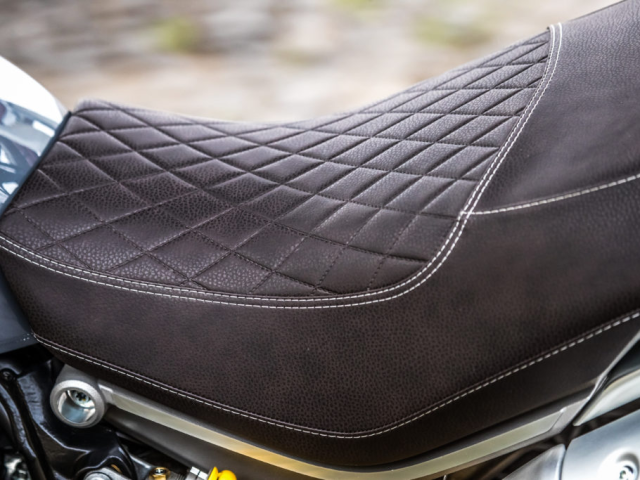 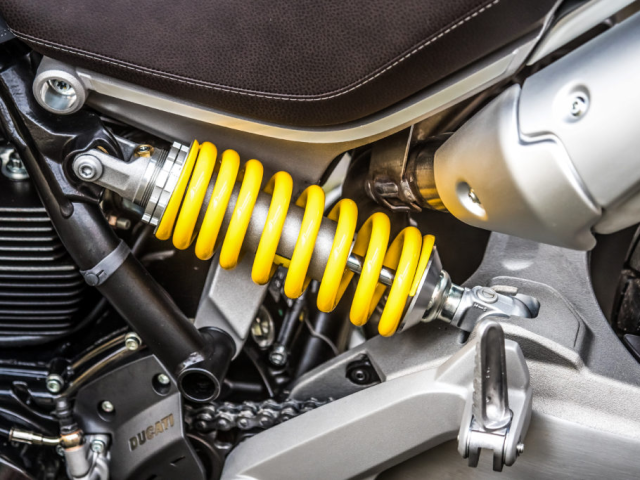 Photos and Video: The Bike Show

Then Ducati launched the 400cc Sixty2, just to really urinate on their parade.

While criticism might fly, Ducati has quietly got on with the job of putting them in showrooms, often stand-alone Scrambler showrooms in certain European cities, and has seen 46,000 of them leave these showrooms, making it easily their number one selling model. Effectively, that’s Ducati’s way of lifting a middle finger to the Scrambler detractors.

On a personal note, I like the Scramblers because I like motorcycling, all motorcycling, and the Scrambler introduces a new gateway into motorcycling for people who would otherwise have never considered it. And the more new people buying Ducatis, the more money Ducati have to develop V4s and Andrea Dovizioso’s race bike. With the mind-blowing performance of the V4 and Dovi’s latest MotoGP victory, apparently the Scrambler has done well for the company.

Now Ducati are introducing a new member of the Scrambler family, and like the villains in Mario Brothers, they’ve saved the big daddy for last.

To celebrate this new reunion, Ducati hosted a launch in the city of Lisbon in the country of Portugal, and were keen to point out the new theme of the 1100 – #RideBigger.

This makes sense because there is a good deal of bigger-ness in the new Scrambler 1100, starting with the physical size. They’ve created a completely new chassis for it – in fact, the 1100 shares just five components, out of the thousands that make up the motorcycle, with the 800 – which makes sense given that it needs to handle more power, more weight and more everything.

It’s bigger in every literal sense – the wheel base is 69mm longer, the seat height is 20mm higher, the width is 50mm wider and it weighs 19 kg more than the 800.

This is all very daunting, but is nothing compared to looking under the metaphorical hood – the motor is 1100cc, air-cooled, two-valved and a 90º V-twin. Some of the more long term Ducatisti’s eyes might light up at this point because they recognise this configuration. It is the very format of engine that was used in the original Hypermotard 1100, the one famously put sideways by Ruben Xaus who completed the photo with a smug thumbs up to the camera.

This sounds exciting, except for the fact that this motor, for the Scrambler 1100, has been completely renovated, with not a single component being the same as in the original Hypermotard. The result of this complete rework is that the power has been dumped down to just 86hp, a pedestrian amount for a motor of this size.

So far we have established that the new Scrambler 1100 is bigger, heavier and makes less power. More so, it makes a mockery of its namesake by having just 150mm of suspension travel, very little ground clearance and no protective bash plate. Ducati must be having a laugh, surely?

What we have done here is made the same mistake as many a troll on forums, Twatter and Vleisbook. We have read the spec sheet and come to an informed conclusion. One that is wrong.

This is something motorcycle journalism has taught me – that a spec sheet is a mere guideline and is very far from gospel. What the spec sheet misses out on is that something that cannot be measured, cannot be accurately put into figures or, for that matter, words. There’s that little thing, that mystical element. The magicalness.

I realise that that isn’t a real word, and it seems superfluous given that we already have the word “magic”, but magic just won’t cut it. It has got just two measly syllables, and smacks of dog-animated SnapChat filter twinkle. Magicalness is rawer and more chaotic. Magic can be controlled and created, magicalness either exists or it does not.

There is a reason for everything, especially if you’re a person with lots of university letters after your name whose sole purpose in life is thinking of new motorcycles. If you’ve had an idea, chances are they’ve already thought of it. If you have a criticism, there’s a good chance they have already considered it.The same goes with anything to do with the Scrambler 1100.

The motor may push just 86 hp, but it also chugs out 88 Nm of torque. More importantly, it pushes its maximum torque at just 4,750 rpm, and while 4,750 is the max point, the torque at subsequent and preceding revs are very similar. Basically, the torque curve is mostly a straight line, from just after idle at tailing off at around 6,500 rpm. They’ve essentially taken a traditional torque curve and inverted it.

They’ve done this through changes to every component of the motor, meaning it is based on the original 1100 but is in no way the same. The most significant difference is the addition of twin spark plugs on each cylinder and valves now have Ducati’s famous 16º overlap. This creates a smoother, more predictable power delivery, and a more controllable ride.

Also added is a RBW throttle body attached to an IMU, much like the V4 and other performance motorcycles. This also means the 1100 has its own three rider modes, traction control and even cornering ABS attached.

All this misses the point, though, because the retuning and that big air-cooled old girl offers that priceless magicalness. It redlines at 8,500 rom, but going past 6,500 rpm is pointless – they could have left the rev counter off, because it’s one of those bikes you ride by feel. You pull off and slightly beyond idle it chunks into life, pulling forward with the driving force of a freight train, letting the flat torque curve pull you forward until 6,500 where it drops off quite sharply, and from there it would be silly to continue, so you notch up a gear and let the wave of torque re-engulf you. It chugs itself forward at a rapid pace, ending in a top speed well above 200 km/h.

There’s more to this motor that just waves of torque, and it has to do with the nature of that air-cooled, two-valved mill that has a sound, a feel, and energy that just evokes the spirits of old, and that in itself adds to the whole Scrambler theme, the whole reason for its existence. It’s not about how fast you can go, but rather about how you feel riding it. Magicalness. And there’s more.

The 1100 is bigger, as we have already discussed, but this is when compared to its 800cc sibling – a motorcycle famous for being minute – meaning that, in a more universal motorcycling sense, it is still a very small motorcycle. The fact that it is devoid of any fairings or screen further compounds its compact feeling. This gives it a fun, easygoing, invincible feeling, that you can ride however you wish without it becoming overbearing or stressful

The classic bench-style seat is one of the cushiest available on any motorcycle and the handlebars are wide and tall as is fitting of the scrambler style. The only possible downside is that the footpegs could be a tad cramped for the long-legged Harry Fishers of this world. That said, you’d have to have a serious height deficiency to not be able to touch the floor on this bike, and should you be so vertically challenged, you could always give the even shorter 800 a go.

The suspension is all adjustable should you wish to get pedantic about the ride that, in standard trim, is harder than you might imagine given the Scrambler’s namesake. It has 150mm of travel that is a far cry from the enduro racers, so this is very much a road-going motorcycle with the scrambler style. The handling on the road is as you might expect – light, nimble ad easygoing. The brakes are by Brembo and behave exactly as you’d expect a Brembo to behave – excellent.

And what style this bike has too. Ducati have wound back the classical, sit-up stance of the 800 and 400 just slightly for this 1100, giving it a hint of aggression that suits its meatier demeanor. The tank is slightly higher, the headlight is slightly lower and the handlebars don’t appear quite as raised as on other scramblers. The entire bike seems more beefed up, culminating in those two manly, raised exhausts out the back. The whole bike looks like an olympic sprinter bent down at the gate, waiting for the shot to go off, releasing the madness.

And there’s classiness within this style. The bike has an array of covers and add-ons, none of them made of plastic or anything cheap. They are all aluminium, all beautifully styled and shaped, and finished by either polishing, brushing or painting. The small, offset dash is slightly more complex than its brethren to cater for the extra electronics, plus there are obviously more buttons on the handlebars too. The headlight is round but is LED with daylight running lights.

The Scrambler 800 and 400 are snazzy city bikes designed to turn every urban journey into a stylish gas. They are particularly attractive to new buyers who are looking for something that will give a happy feeling to their garage without overwhelming them on the way to work. And they have succeeded. Massively.

With The Scrambler 1100, Ducati have blurred the line in their showroom slightly, creating a less than clear distinction between the fun-crazed yellow section on one end, and the speed-freak red machines on the other. The 1100 has the motor and look to stir the demon in our soul, but the size and feel to not leave us fearing for our lives. It is has maintained the Scrambler theme and philosophy, but has Ducati blood running through its veins. It encompasses everything Bologna has to offer in one joyous package.

Like the 400 and 800, the 1100 comes in different versions. There is the standard Scrambler 1100 with alloy wheel, standard everything and a choice of either yellow or black paintwork. It isn’t as flashy as the other versions, but then it comes in at the less flashy price of R191,000.

The Scrambler 1100 Special is the version we were riding at the launch and seen in most of the photos in this story. It has spoked wheels, the Custom Grey paint job, anodized side covers, that classic brown seat, a brushed-effect swingarm and mudguards, slightly lower handlebars and a chrome exhaust. A true beauty for R208,000

The Scrambler 1100 Sport, as the name suggests, is the sportier version. The seat is black with a more athletic shape, the tank, swingarm and mudguards are black with yellow striping on the tank and mudguards. There’s more than just a sporty look – it also receives Ohlins forks and an Ohlins shock, plus a Termignoni twin exhaust, to give it some true authenticity. Performance goods come at a performance price, hence the it’s R221,000.

The Ducati Scrambler 1100 models are expected in South Africa some time in May. 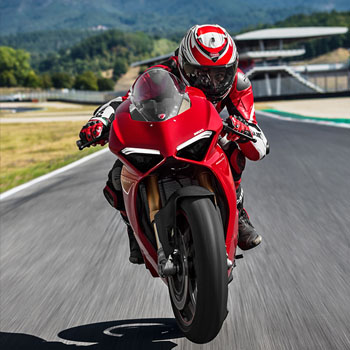 While criticism might fly, Ducati has quietly got on with the job of putting them in showrooms, often stand-alone Scramb

Summer, Italian style, the Romagna Riviera, the city of Bologna and the roar of thousands of Ducati bikes: three days to

Launched in 1982 (simultaneously in Cape Town and Johannesburg) by the Italian Motorcycle Owners Club (IMOC), the Toy Ru